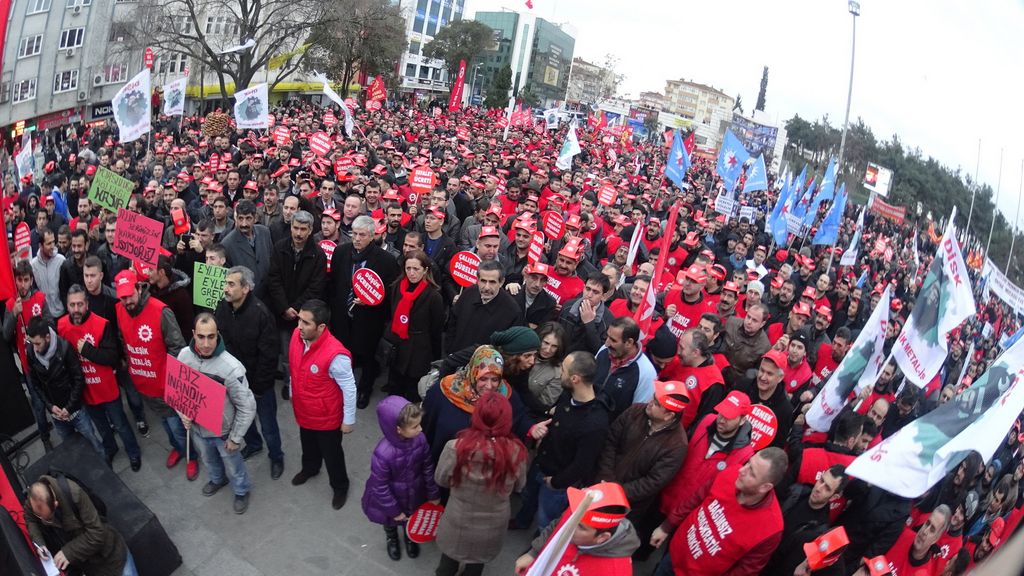 For Birleşik Metal-İş, the most important demand in our draft was some improvement for low waged workers because in metal sector in Turkey, there is a huge gap between workers who are doing the same job. That’s why, union asked for a general improvement for low waged workers before doing any payrises. But instead of doing this, MESS (Metal Employers’ Organization) widened this gap with the agreements signed with other unions. Also additional to this, they extended the duration of the collective bargaining agreement to 3 years from 2 years which will create more impoverishment for metal workers. MESS imposed metal group collective bargaining agreements which determines starting wages for new workers only slightly above the statutory minimum wage. For example, with the agreements which were signed, the hourly net wage for a new starting worker will be 5,80 TLs for an hour, but on July the hourly minimum wage will be 5,66. So for a worker who will start the work on July and became a union member then if you deduct the union membership fee, the net amunt which this worker will receive, will be even less then the statutory minimum wage. Birlesik Metal Is union will not accept these. That’s why, our union organized a general assembly on 10th of January with all the shop-stewards from these workplaces and the decision of that assembly was to go on strike in these companies starting by 29th of January 2015. In Turkey, strikes has to go on until there is an agreement otherwise the union will loose its competency so the strike will go on until there is an agreement. It will start on 29th of January but nobody know when it will end. It will be a tough process and two other metal unions already signed this agreement and it will make it more difficult and there is a difficiult winter in Turkey, but Birlesik Metal Is members are determined to end this system of impositions and they will not accept the slavery conditions. But they will need international solidarity during their tough fight.
You can send your solidarity letters, messages, videos, photos etc. to eyupozer@gmail.com and if you have any questions you can contact us from 00905362059121

(*)In Turkey we have something called “group collective bargaining”, it is NOT a sectoral agreement actually it is a group of company agreements which are negotiated jointly for some number of workplaces between Metal Employers’ Union and unions in the sector

This entry was posted in Uncategorized. Bookmark the permalink.